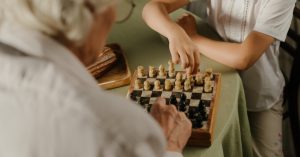 Have you ever wondered what the ideal extramural activity or sport would be for your child to participate in, especially during this time when everyone must be wary of physical contact? Then chess is the answer. Chess is a sport in which only two players, the chessboard and of course the chess pieces are involved. Following is a short discussion of the reasons why it is such an excellent sport for children.

It’s outstanding exercise for the brain

During a game of chess the brain is very active. Because the brain works like a muscle, it needs regular exercise to develop and remain healthy. With chess, the left as well as the right side of the brain are utilised, which therefore is beneficial for children’s brain development. Research has proven that in later life chess decreases the risk of dementia and Alzheimer’s disease.

Promotes the growth of dendrites

Dendrites work like antennas that transmit signals from the brain to the rest of the body. By already learning to play chess from a young age, the dendrites are stimulated to grow and develop faster and continuously. In this way the child’s cognitive skills improve.

The fact that a game of chess compels a person to calculate ten steps ahead and to try and determine the possible outcomes of each move, is a form of spatial skills development. It helps children to visualise, analyse and manipulate objects in a determined space.

Problem-solving skills are essential for school-going children. Chess helps them to perform better in subjects such as maths and science as it helps them to recognise, analyse and solve problems of a diverse nature, and contributes to a feeling of independence. It also helps them with problem-solving in various life situations.

Chess is a game of strategy, with chess pieces that have to be moved in specific patterns. To be able to play, the child must memorise these patterns. Over and above this, the player must also be able to remember his opponent’s last move, as well as how his strategy is evolving. Even to remember all the opening moves and all the tips and tricks, improves the child’s memory. To teach the brain to remember and store this information promotes the ability to memorise all information in all situations in real life.

Chess is an excellent way of giving children a break from information overload and to involve themselves in a fun-filled and enriching game. It requires them to concentrate and focus totally on the game and for a while forget everything around them. In this way their concentration improves, not only on the game, but also in every life situation.

Helps with planning and pre-emptive skills

Chess compels the child to keep the consequences of every move in mind, which is why he learns to plan before making the next move. This  planning eventually becomes a way of life that is applied in everyday life situation, so that you will not regret your choices later.

Players have to wait patiently and for the right moment to attack. It teaches them the skill to focus during the game an also when they aren’t playing. Self-control is an essential life skill that is enhanced by chess.

Good sportsmanship is to win gracefully, but also to be able to lose gracefully and to acknowledge when someone performed better than you in a given game. This is a life skill that can and should be applied in all walks of life.

It keeps the child away from technology

Children are growing up in a time when technology such as video-games, television, the internet and cell phones rules the roost. Chess offers the opportunity to become involved in an educational game in real life and for a while forget about technology. Normally the interaction with technology is reactive in nature, while a game of chess is mainly proactive. However, don’t underestimate the value of online chess, such as playing against ‘players’ with diverse skills and styles, to utilise additional instruction styles and to practise any time without any pressure (https://www.chess.com/play/computer).

To win a game of chess requires skill and not mere luck, especially if the opponent is older or more experienced. This is an excellent way of promoting the child’s self-confidence.

Fun is part of being a child. Children like to learn something new and to master new skills. To play chess with friends of family members creates good memories for children.

How to motivate/encourage your child to play chess

Children can start playing chess as early as four to five years old. A practice session of approximately an hour per week during the first two years is sufficient. By the age of six he will already stand out above his contemporaries with regard to skills such as concentration.

Don’t force a child to play. Should he however show interest in the game, begin with a combination of theory and practice. In this way he learns the basic skills before progressing to tactical movements and strategies.

Tell stories or jokes. Taking the child’s age into consideration, you could convert the game into a fairy tale or a battlefield, with each chess piece representing a character.

Just as with any other sport, children have to practise regularly. Older children should practise at least one to two hours per day. Even those who aren’t talented can through regular exercise reach their goals and improve their skills.

Be generous with compliments. Acknowledge every achievement or progress, however slight. This will encourage him to keep on learning and trying to improve his skills. Allow him to make mistakes and emphasise the importance of perseverance, however difficult it might be.

If your child is serious about the game, it would be advisable to let him start participating in competitions within the first two years. By playing against older and more experienced players, he will be challenged to test the boundaries of his own skills and it will improve his overall performance.

From the above it is therefore clear that playing chess develops skills which your child can apply in his daily life as a child as well as an adult.  These include problem-solving skills, creative thought, concentration abilities, self-control, self-confidence and sportsmanship.