WerkNet
Your Family
Your Career
Your Health
Your Money
You and the Law
Occupational Guilds
Solidarity Youth
S-Leer
Home › Articles › Children and cell phones: Be aware of the dangers

Children and cell phones: Be aware of the dangers 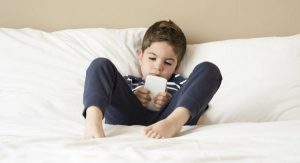 Children traditionally fear things like the dark, snakes, injections or thunder. Nowadays there is something that children fear even more ─ being without a cell phone and therefore not being able to have contact with others.

This fear is known as nomophobia and teenagers who suffer from this cannot live without their phones. According to a recent study by the Youth Research Unit (YRE) at Unisa’s Bureau for Market Research (BMR) excessive cell-phone usage by teenagers between the ages of 12 and 18 years is a social problem.

The impact of excessive usage

Access to cell phones makes the availability of online pornography, which is a big problem among the South African youth, as easy as pushing a few buttons, confirms Dr Antoinette Basson, a psychologist at the BMR. Experts estimate that South African children are on average exposed to serious pornography at the age of 11.

Apart from the fact that manipulated photos give rise to false images and expectations of sexual relationships and have a big influence on children’s conception of their bodies and their understanding of sexuality, it can also lead to an addiction that is difficult to shake off.

Pornography is a much bigger problem than most parents and teachers think, says Basson. “Children as young as Grade R have been brought to me because they were addicted to pornography.”  When a person watches pornography, dopamine and endorphin are released (just as in the case of drug abuse). And as with drugs, the user quickly reaches a saturation point so that more and “harder” pornography is needed to reach the same feeling of satisfaction.

What can parents do?

“Pornography addiction must be handled with the same seriousness and circumspection as drug addiction,” says Rademeyer. If you have become aware that your child is exposed to pornography or watch it regularly, she has the following advice: “Do not yell at your child or humiliate him. Explain to him or her that it is wrong, but that you will tackle the problem as a team. Get professional help, especially if it has happened more than once.”

Not only bad news

Nowadays cell phones form part of most children’s lifestyle and can play an important part in forming youth identity if it is used responsibly, says Tustin.

If learners switch off their cell phones in class and in the evening before going to bed, if they use it as a learning aid and impose daily time limits for its use on themselves, it can make them feel safer, self-confident, relaxed and in control of their lives.

However, if it offers easy and immediate relief of feelings like anxiety, social exclusion or boredom, it could aggravate negativity. This is why its use must be monitored.

To find out how many times a day you check your cell phone, you can download a free, simple app such as Checky by Google Play Store. Also download software that identify and block suspicious websites. Most smartphones offer free software for the protection of children. Visit www.kaspersky.co.za/safe-kids.