WerkNet
Your Family
Your Career
Your Health
Your Money
You and the Law
Occupational Guilds
Solidarity Youth
S-Leer
Home › Articles › Do violent video games make our children more violent? 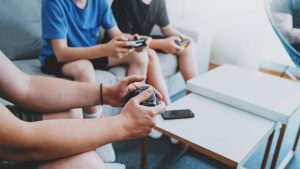 Video games can be a wonderful pastime for children. They can practise problem-solving, plan cities, take care of virtual pets and run races without sweating a drop. However, there are also thousands of violent games and many parents are not sure whether the advantages cancel out the disadvantages.

Research findings are indecisive. In order to do proper research, long-term studies will have to be done on large groups of children from different backgrounds. Research that has already been done, lead the American Psychiatric Association to publish a policy statement in 2015 that stated that violent video games could lead to more aggressive moods and behaviour and be harmful to a player’s feeling of empathy and sensitivity to aggression. Violent video games could therefore affect children’s behaviour in the long run.

However, it was not found that these games caused an increase in violence and violent crime and there is no proof that your child has a bigger chance of committing crime or becoming homicidal someday. Violence is a form of aggression, but not all aggressive behaviour is violent. Your child may yell, throw around objects, say violent things or hurt himself in his aggression. This is not healthy behaviour but it does not make him a violent person that will hurt somebody else.

It did emerge, however, that the competition between the players in video games was a stronger indicator of aggressive behaviour than the violence in the game itself.

It is important to realise that the exposure to violent games is not the only cause of aggressive behaviour. Mental illness and an unfavourable environment at home or at school are factors that increase the risk of aggression and violence.

How can we protect our children against problematic behaviour and mental-health issues when they play video games? Make sure that you have a sound relationship with your child. Join your child in playing the games, talk about what is happening there, and keep fiction and fantasy separate from reality. Show empathy and talk to him about how he feels when his character is shot in the game. Make sure that your child understands what behaviour is acceptable in real life. Also teach him to get up and walk away when he becomes too frustrated. He needs you to help him learn how to regulate his emotions.

You know your child. Be on the lookout for signs of increasing aggression, changes in behaviour, social isolation, irritability, sleeping problems and an unnatural interest in the types of weapons that he sees in the game.

If your child shows aggression, it would be to his immediate and long-term benefit rather not to play violent games any longer. There are more than enough other games that he can enjoy. Explain this with empathy and it will be easier for him to come to terms with it.