Fidgeting at the desk 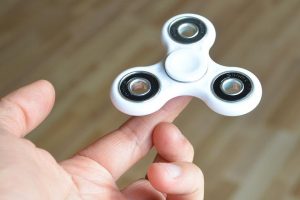 Some people can’t stop singing its praises. Others, again, think it’s dangerous and extremely ineffective. One thing is sure, though, and that is that the latest toy for children, the  fidget spinner, has swept around the world like a house on fire.

The watchdog that monitors toys, World Against Toys Causing Harm (WATCH), warns that there are serious dangers hidden in the toy, with choking being one of the most dangerous. They tested the spinner and found that parts of it can break off and become stuck in small children’s throats.

But what is this toy and does it really help?

The first fidget spinners was designed as far back as the early 1990s, but really only became popular this year. It is a toy designed to help children with attention deficit to concentrate, or as a toy that can calm down busy children. The principle is that children have something to fidget with in situations that call for a lot of concentration. It is relatively new on the market but research into whether it really has a positive effect on children has not yet been done.

It has been proved in the past, though, that something to fidget with or a sketchbook can help a lot with concentration when adults have to sit in on long meetings.

Researchers believe that children with attention deficit can benefit with things to fidget with because it stimulates the underactive parts of the brain ─ especially parts that play a role in attention, planning and the control of impulses.

What do the experts say?

Dr Marie Venter, an educational psychologist from Pretoria, is of the opinion that it is very important for parents and teachers to realise that spinners are only toys and in no way a method of treatment.

Marie says that parents and teachers should bear in mind that there are many specific ways and even medication to treat children suffering from attention deficit.

“There is no easy solution to it, such as buying a toy. It is important that people should not buy this toy hoping that it is going to totally change their children’s behaviour.”

She can understand that people now suddenly hope that the toy will drastically change their lives.

“Parents and teachers become desperate. They look for a way out and hope but, as with everything in life, there usually are no easy ways out of difficult situations.”

In a survey on a parenthood page on Facebook, The way of the practical parent, most parents agreed that their children do not concentrate better when they play with the pinner.

Parents have also warned each other to buy the toy at esteemed shops that take safety measures into consideration.

Additional source: Wikipedia, The Way of the Practical Parent (Facebook) and www.watch.com

Break the silence about domestic violence

Fathers are stepping up! Here’s how working dads can own their roles as parents