WerkNet
Your Family
Your Career
Your Health
Your Money
You and the Law
Occupational Guilds
Solidarity Youth
S-Leer
Home › Articles › Heritage Month: Let’s celebrate our heritage by introducing our children to traditional games 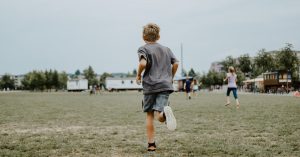 Another way of celebrating our cultural heritage, is to recall traditional games we played as children and reintroduce them to our children and play them together. Following are some games which I recall with nostalgia.

Goat in the cage. Players stand in a demarcated area (the cage), with two players on the outside, one on each side of the cage. The two players try to hit the players inside the cage with a ball. The player who is hit, must leave the cage and help to throw the ball. The last player left in the cage is the winner of the game.

Cat and Mouse is a group game in which all the players, except two, stand in a large circle and hold hands. The other two players are the cat and mouse. One stands inside the circle and the other on the outside. When the game begins, the cat must chase the mouse. The players holding hands lift their arms to form an arch so that the mouse can escape to flee from the mouse, while they drop their arms to prevent the cat from catching the mouse. As soon the mouse is caught, he becomes the cat and a new mouse is selected.

Crabs and Crawfish is played outside where there is enough space to run around. The participants are divided into two equal teams – one team is the “crabs” and the other the “crayfish”. The team leader calls out either cr-r-r-r-abs or cr-r-r-r-ayfish. The teams whose name was called out, chases the other team and tries to catch as many of them for their team, until all the players from one team have been caught by the other team. This is similar to Wolf, wolf, what is the time?

Man in the middle. Two players throw a ball at one another while the rest stand in the middle between them. Everyone must try to catch the ball. The one who catches the ball changes places with the one who threw the ball.

Rotten egg. Everyone sits with crossed legs in a circle on the ground, facing each other. One player is the runner who begins the game. He runs on the outside of the circle and unseen drops a folded handkerchief/pebble behind one of the sitting players. This player must then pick up the handkerchief/pebble and chase the runner until he sits down in the empty space in the circle. If you don’t pick up the handkerchief before the runner reaches you again, you are a rotten egg and must sit in the middle of the circle until the next person is caught out.

Hide-and-seek. The game must have limits as to where players may hide, for example “any place in the house” or “just in the yard”. One player is selected to be on first. A place (the block) is chosen where he must wait and count to 50 out loud while the others go and hide. Then he shouts, “I’m coming!” and starts running around, looking for the hidden players. The other players remain quiet in their hiding places until they are discovered, or until the player who is on, gives up. When somebody is found, the player who is on, calls out, “I see you … (mentioning the player’s name). If you think you can reach the block before the player who found you, you can run up to the block and shout, “One, two, three, block myself!”. As soon as everyone has been found, or blocked themselves, the next round begins and the player who was found first, is on.

Nightwatchman. All the players sit in a dark room. While the ‘nightwatchman” waits outside, each one chooses a number. If there are 10 players in the room, the figures may not exceed 20. As soon is the light is switched off, the nightwatchman enters the room and says, “The nightwatchman is here and the clock strikes 5!”. Number 5 must then indicate his presence with a knock. The nightwatchman then gives number 5 a task, for example, “Roar like a lion” or “Squeak like a mouse”. The nightwatchman must then guess who is making the sound. The one who is identified becomes the next nightwatchman.

Ten little kiddies looking for work. Player A is the king who sits on one side on his throne. His “subjects” must come to him and say, “Ten little kiddies looking for work!”. The king replies, “What kind of work?”. The subjects say, “Any work!”. The subjects then go away and decide what work they want to do. They return to the king and demonstrate with gestures the work they want to do. As soon as the king can guess what they are doing, they all run to another spot. The king chases them and the person who is caught becomes the new king.

Clapping hands. Two teams stand opposite each other at a running distance. Player A of the first team goes to the other team, who stand with their hands stretched out in front of them, palms downward. Player A walks up and down in front of them and with both hands brushes over the top of the outstretched hands. Suddenly he touches one hand on the top and runs back to his team while the one whose hands he touched tries to catch him. If he is caught, he becomes part of the other team. If not, it is his turn to do the same as part of the other team and run away. The team with the most members is the winner.

Names, surnames, animals, towns. On a clean sheet of paper write down all the letters of the alphabet randomly and circle each letter. One player shuts his eyes and presses on the paper with a pen to identify one letter. Each player has a sheet of paper in front of him with columns for name, surname, animal, town (additional columns may be chosen). If the letter “S” is chosen, each player writes down a name, surname, animal or town that begins with an “S”. Points are then awarded, for example, five points for each correct answer. If two players have chosen the same word, they are awarded three points each.

Have a look at the websites below for more games.