WerkNet
Your Family
Your Career
Your Health
Your Money
You and the Law
Occupational Guilds
Solidarity Youth
S-Leer
Home › Articles › Is marriage counselling worth it?

Is marriage counselling worth it? 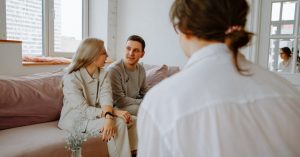 The day you stood at the altar with stars in your eyes you could not imagine that you might have to see a marriage counsellor one day. After a few years, it feels as if you can no longer make things work. There are just too many differences – which you realised too late. The main problems arise because people have not learned to communicate clearly and effectively.

Anri van den Berg, a marriage, relationship and trauma counsellor, explains it as follows: “Of course, infatuation plays a huge role in our choice of a partner. We are made for each other. No one comes close to you as a match. You are more than willing and able to be exactly the person I need you to be y– someone who meets my needs … But as our marriage progresses the rose-tinted glasses of infatuation slowly but surely begin to slip off and you start to notice little snags. There are things that irritate and that cuteness that was part of your partner’s being are slowly but surely turning into irritations …”

When a man and a woman marry each one brings to the marriage a unique personality. Sometimes these personality differences complement each other and merge into a compatible relationship. However, there can be problems if one or both partners are inflexible, unwilling to give or strongly resist change.

When a couple is newly married it is usually followed by a time of excitement, enthusiasm and youthful idealism that may change later. Sometimes, marital problems surface, or are exacerbated by the pressure of other people or stressful situations such as:

Marriage partners can resist most of these factors. When there is insensitivity and stubbornness there will also be tension and conflict. Communicate and talk to each other. If you do not talk, your partner will not know what is going on in your heart. Be honest and share the good and the bad things that happened in your day. Support each other. Cheer each other up. Carry each other. Be there for each other.

If you are battling with communication consider counselling. To go for counselling is not easy. For some it is an embarrassment, and it can be seen as an acknowledgement of failure. Counselling is often most effective if a couple seeks help early on and not only by the time the problems have become too severe.

“It is my experience that if you simply improve and make a couple’s communication methods effective you can change the whole relationship,” says Anri van den Berg.

If you both want to save this marriage and want to turn it into the relationship you both had in mind when you stood at the altar, marriage counselling can be of great value.