WerkNet
Your Family
Your Career
Your Health
Your Money
You and the Law
Occupational Guilds
Solidarity Youth
S-Leer
Home › Articles › Recipe: Chocolate and almond Swiss roll 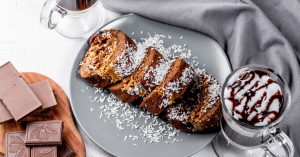 When everybody is working from home, it’s great to be able to treat them to a slice of this chocolate Swiss roll.

Line a baking plate with baking paper and grease it with butter. Sprinkle a layer of cocoa over the bottom of the baking plate to prevent the Swiss roll from sticking when you want to remove it from the plate.

Sift the cake flour, cocoa, baking powder and salt together in a mixing bowl.

Add the egg-yolks and castor sugar to a separate mixing bowl and beat well.

Add the sour cream, melted butter and vanilla essence to the egg-yolk mixture and beat well.

Add the dry ingredients to the egg-yolk mixture. Beat well until the batter is light and spongy.

Beat the egg-whites with an electric mixer until stiff.

Fold in the rest of the egg-whites and stir through gently.

Pour the batter into the baking tray and fill all the corners. Smooth the top layer.

Bake approximately 10 to 15 minutes until done and a test skewer comes out clean.

Remove the warm Swiss roll from the baking tray immediately. Roll up the cake carefully with the baking paper.

Set aside to cool completely.

Beat the fresh cream and castor sugar together until the cream thickens. Spoon the caramel treat into the thickened cream one spoon at a time. Fold in gently until most of the caramel has been worked through.

Spread the caramel cream over the Swiss roll. Roll it up again carefully.

Add the milk and broken dark chocolate to a mixing bowl. Heat the fresh cream in a saucepan on the stove. Add the warm cream to the chocolate. Stir through well until all the chocolate has melted. Add the coconut oil to the mixture.

Set the melted chocolate cream aside for 10 minutes until the chocolate has cooled down a bit.