WerkNet
Your Family
Your Career
Your Health
Your Money
You and the Law
Occupational Guilds
Solidarity Youth
S-Leer
Home › Articles › Recipe: Lemon macaroons with a dark chocolate filling 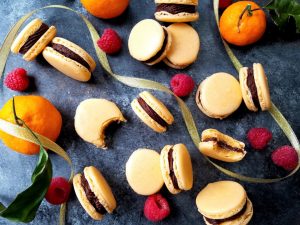 Easy French macaroons from your own kitchen.

Spray a baking sheet lined with baking paper with Spray and Cook.

Sift the icing sugar and almond flour together until very fine.

Beat the egg whites with an electric mixer until they turn white. Add the crème of tartar and castor sugar and beat to a smooth and stiff consistency.

Sift the almond and icing sugar for a second time over the egg whites. Fold in gently until well blended. The mixture will be very stiff.

Add the limoncello and food colouring. Mix well until the batter has turned red.

Fill a spout bag with the batter. Press out circles of approximate three centimetres on to the baking paper.

Shake the pan once to level the top of the macaroons.

Place the pan aside for approximately 20 minutes for a layer to form.

Bake for approximately 20 minutes or until the macaroons have risen and are done.

Set aside to cool.

Heat the fresh cream in a sauce pin up to boiling point. Pour the warm cream on top of the pieces of chocolate and stir well until all the chocolate has melted.

Add the limoncello and stir well. Set aside to cool. Stir every ten minutes until the ganache has cooled off completely.

Fill a spout bag with the ganache.

Spoon a small bit of jam on to the middle of each macaroon. Spray the limoncello ganache in small circles.

Place the ganache lids on the macaroons.

The five core challenges that working parents need to overcome

Driving safely when it rains, visibility is poor

Load shedding: How to protect your house

How to handle your toddler’s separation anxiety