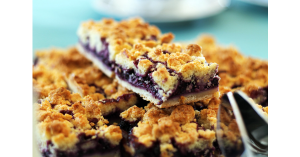 So tasty for the summer, with or without ice-cream.

Preheat the oven to 180ºC. Line an oven dish with baking paper and grease well with butter.

Mix the castor sugar, baking powder, flour and salt in an electric mixer.

Add the butter, egg and vanilla extract. The batter will have a thick and lumpy appearance.

Divide half of the batter and press flat in the oven dish to form a crust. Press the crust flat into all corners of the oven dish.

Gently stir together the strawberries, raspberries, cornflour, castor sugar, coconut and the juice of one lemon.

Pour the mixture into the crust and spread evenly.

Crumble the remaining dough over the mixture.

Bake for approximately 30 to 40 minutes or until the crumble turns golden brown.

Set aside to cool and cut into bars.

These bars freeze very well and can be stored for up to three months.