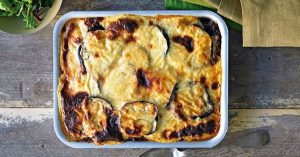 Filling and nutritious food for the winter.

Salt and pepper to taste

Peel and slice the brinjals. Pack on an oven plate and bake for approximately 10 minutes until the slices start colouring at the edges.

Add half a cup of water to the stew.

Make a white sauce with the butter, flour, milk, salt and pepper. Stir continuously until the sauce starts to thicken.

Pack a layer of brinjals in an oven dish. Spread a layer of the rump steak and tomato mixture on top of the brinjals.

Pour a layer of the white sauce over the rump steak-tomato mixture.

Repeat the whole process once so that the white sauce forms the top layer of the dish.

Bake in the oven for 10 minutes for 20 minutes.

Crime: We need to take care of ourselves

Family research – when the bug starts to bite

Domestic violence – how can you help?