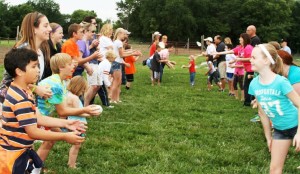 Knowing that the summer months are long could be a great prospect for some. But any parent knows that to keep your child occupied for so many weeks is not an easy task.

Annemie Lombard, an author, says she has a plan: Traditional games that children play inside or outside and in this way are kept busy and entertained for hours. She has delved into a few from her childhood and is happy to share them.

Everyone walks behind the “wolf” in a row. They take turns to ask, ”Wolf, wolf, what is the time?”. The wolf then answers with a time. As soon as the wolf says, “Dinner time!” everyone has to run away. If the wolf catches you, you are the new wolf.

A can containing some pebbles is placed in a circle. Player A counts to ten while the other players go and hide. As soon as Player A finds you, he shouts, ”Kick the can for (player’s name)”, runs back to the circle and kicks the can and again shouts, “Kick the can”. The person who was found now becomes the seeker and must first put the can with pebbles back in the circle before he starts looking for the others, who have to find new hiding places.

The players hold hands and dance in a circle around one player in the middle of the circle, singing:

A pocket full of posies.

On the last word the players all curtsy all fall down. The last person to fall down then replaces the player in the centre of the ring.

Player A walks around the other players sitting in a circle. He taps each one on the head, calling each one a “duck”, until finally he calls one a “goose”, who has to jump up and try to catch Player A before he reaches the vacated spot where he then sits down. The “goose” now walks around the circle and tags a new “goose”.

Player A counts to ten while the other children go and hide. While Player A looks for them, each of the others tries to run back the home base and then shouts, “Block myself!”. If Player A however sees you before you reach the base, he shouts, “Block you!” and then you are the new seeker.

Two players throw a ball to one another while a third player stands in the middle between them. The middle man must try to catch the ball. As soon as he does so, the person whose throw he intercepted becomes the middle man.

Everyone sits in a circle. The first child whispers a message in the next child’s ear. In this way the message is passed on until it reaches the first person once again. The message at the end must then be compared with the original message.

The rules differ but basically it is tennis played with the palm of the hand instead of a racket.