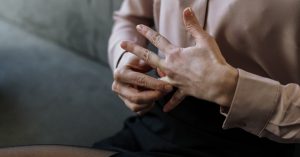 Covid-19 and the ensuing national lockdown have put a strain on our everyday lives. When it comes to relationships, even more so. Divorce is surging. This is the impression many media reports have conveyed, suggesting marriage is crumbling under the pressures of lockdowns, job losses, school closures, and the general uncertainty of 2020, spilling over into 2021.

Many couples admit the global pandemic has forced them to re-evaluate their relationships, often choosing to separate for whatever reason.

South Africa ranks 83rd out of 154 countries for divorce. According to the stats, most people in South Africa have multiple reasons for divorce, but many of them aren’t specifically linked to the pandemic. The most popular single reason is: “There is no love, respect or affection between the parties.”

In South Africa there has been a 20% increase in divorce applications since level 4, according to law firm DIY Legal’s analysis of available data. During lockdown level 5 there was an increase in interest to initiate divorce proceedings, but since it wasn’t possible, the majority waited until they weren’t locked down to take the next step.

“As far as international trends go, South Africa seems to be in line with the curve,” DIY Legal says, explaining that the main cause of separations was that couples under lockdown realised that they did not actually love each other.

There are many reasons why couples seek a divorce. These reasons have been amplified during the lockdown. Financial insecurity due to retrenchment and companies going under, communication issues such as secretly incurred debt by one spouse and disagreement on how to adhere to lockdown regulations, household issues such as parents working from home, home schooling and disagreement on the distribution of chores, and an increase in substance abuse and domestic violence are especially problematic right now. New stresses include the divisiveness of having vastly different opinions on how the government has handled the shutdowns. Even couples with strong marriages have seen their relationships tested with all of the additional stressors during the pandemic.

However, there is some good news to report about the state of marriages in 2020, going into 2021.

While some couples are struggling, the majority of husbands and wives report that their marital unions were stronger in 2020. According to the American Family Survey (AFS), a new survey of American families conducted by Deseret News/Center for the Study of Elections and Democracy, 58% of married men and women between the ages 18-55 said that the pandemic has made them appreciate their spouse more, while 51% of husbands and wives said their commitment to marriage had deepened. Furthermore, the AFS found that the share of married people reporting their marriage was in trouble fell from 40% in 2019 to 29% in 2020.

When faced with massive social upheaval, we often develop a deeper appreciation for our families – including our spouses. For many couples who make it through this pandemic together, their marriages will likely emerge stronger and more stable, and that is a bit of good news to take away from the year 2020’s mostly bad news.

Wilcox, W.B. & Stone, L. Divorce is down during Covid. Institute for Family Studies.

Protect your child against human trafficking

Teach your toddler about emotions and how to handle them

Children and serious illnesses: Here’s how to handle them