WerkNet
Your Family
Your Career
Your Health
Your Money
You and the Law
Occupational Guilds
Solidarity Youth
S-Leer
Home › Articles › Who pays when you go out?

Who pays when you go out? 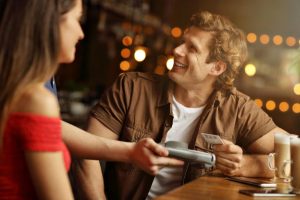 In the good old days it was very simple. Traditionally the man always paid, no matter who ate what, who chose the restaurant or who arranged the outing. With time, however, this tradition was replaced by personal preference and flexibility.

This flexibility can cause a lot of tension when a couple, on their first evening out, have totally different ideas about who is supposed to pay the account. Fortunately there are guidelines that can help to ease the pressure.

On the first outing the man must be prepared to pay. Should the lady offer to pay half, the man should decline her offer. However, if she insists the man should allow her to. She could possibly feel that she did not have to rely on a man to buy food for her, or that the outing did not go too well and that she does not want to feel that she had any further obligation after the evening out. Some men will, however, feel insulted if the woman offers to pay. Both parties therefore have to be sensitive and subtle when it comes to paying.

In a case where the woman asked the man out, she must be prepared to pay. He must then be chivalrous enough to offer to pay or at least to pay half. However, he does not have to insist if she does want to allow him.

Women who are traditional and believe that the man must pay, should still make sure that they have enough cash on them. Perhaps the man doesn’t feel the same or forgot his wallet at home. Always be prepared to take care of yourself.

The same routine can be followed at subsequent outings. The woman should still offer to pay, but must not feel offended if the man begins to accept her offer after a few outings.

When you have learned to know each other better and know that both of you are interested, the time has come to talk about it. Share your opinions. Perhaps you decide on taking turns or to split the account. Each can pay for his or her food, or you can share the account according to personal income.

In the end there are no hard and fast rules and gender should not be the decisive factor. Rather regard it as a matter of importance and of what is practical. Do not make it a make-or-break situation. If someone wants to spoil you by paying, simply say: yes.